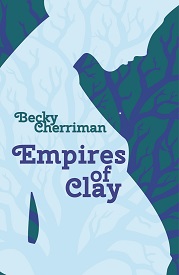 In December 2013 I was awarded a bursary by Cinnamon Press for poet and mentor Caroline Davies, to support the compilation of my first poetry collection. That collection became Empires of Clay.  The book was published by Cinnamon Press and launched on 8th November 2016 at The Leeds Library in association with The Leeds Big Bookend. A poem from this collection, ‘Jesus Lives’ was highly commended in the Forward Prize 2017. Copies of the collection are available from Cinnamon Press or from me at readings.

‘Short in length but wide in scope, Becky Cherriman, something of a rising star on the British poetry scene, deals with a range of issues in this short collection. Syrian war, British austerity, love, rape, parenthood: all are treated with intelligence, skill and a deep sense of pathos, human insight and compassion’ (R. H. Tyers).

‘If you aren’t able to get double the pleasure by hearing Becky read, then read them aloud yourself. Not a good read, a fantastic one’ (Moira Garland).

If you enjoy Empires of Clay, do drop me a message or spread the word by leaving a review on Amazon and/or Good Reads.